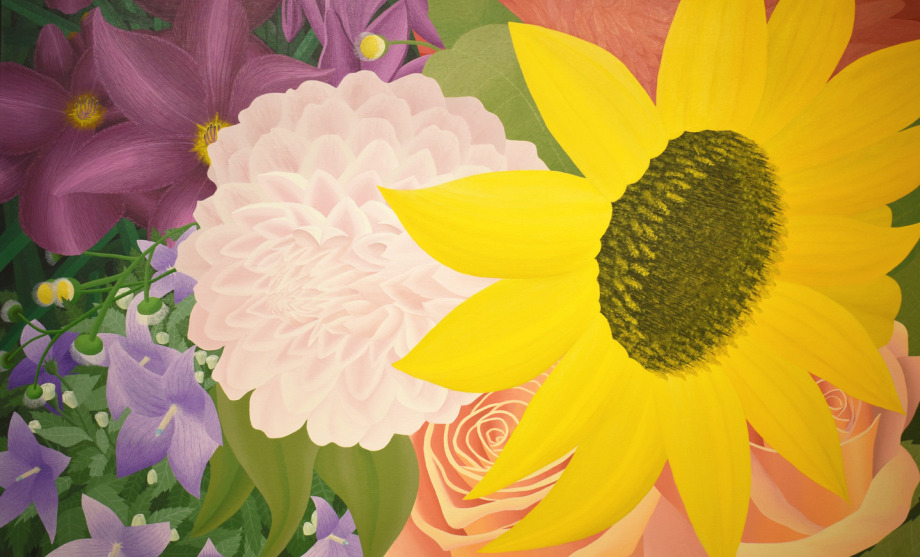 The inner workings of Robert Pentelovitch

Driving south from Kingston on Route 209, one enjoys some of Ulster County’s most picturesque views. But now the route offers a cultural destination worth a trip in itself: an exhibition of Robert Alan Pentelovitch’s paintings, titled “Machine Works,” at Hurley Motorsports, located between Hurley and Stone Ridge. If the Audi service-and-sales facility seems like an odd location for a gallery, it’s perfectly suited to this work, which consists of large, striking paintings of close-up views of automotive transmissions, mining equipment and other types of machinery: contraptions essential to the smooth operations of daily life that yet remain hidden and mysterious.

Pentelovitch, who is a friend of Hurley Motorsports’ owner Sloan Hoffstatter, divides his time between Esopus and Manhattan. His precise-but-bold, dramatically lit and brightly colored paintings emphasize abstract form; stylistically, they are reminiscent of the Precisionist paintings of Charles Sheeler, who depicted auto factories, smokestacks and other industrial subjects starting in the 1920s. Pentelovitch’s paintings have been bought by many museums and private collectors. Originally from Minnesota, Pentelovitch earned an MFA from the San Francisco Art Institute and received a Guggenheim Fellowship in 1991.

“I’ve always been mechanically oriented, and have been painting and drawing cars since I was a little kid,” said Pentelovitch. He noted that his works avoid the dryness of technical drawings, and are instead imaginative recreations, sometimes infused with eroticism. They also relate to Pop Art in their smooth execution, subject matter and monumental size. Of the 12 pieces on display at Hurley Motorsports, the largest is five-by-seven feet.

He added that he has been fortunate to have had loyal and connected patrons over the years, as well as the support of his wife, Janet. Art “chooses you,” he said. “One thing leads to another. I already know the next six paintings.”

Pentelovitch said that he’s hoping that the show on 209 “will introduce me to the area and establish a destination.” He added that in the future, he may follow up with a show of his landscapes and floral works, “which look like gears.”

“Machine Works” will be on display at Hurley Motorsports, located at 27729 Route 209, until October 27. Gallery hours are Tuesdays through Saturdays from 8 a.m. to 5 p.m. A selection of Robert Pentelovitch’s works can be viewed at www.hmsgallery.com and www.pentelovitch.com. 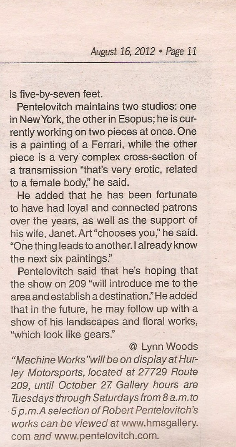